Poll: Do you wear coveralls while caving? 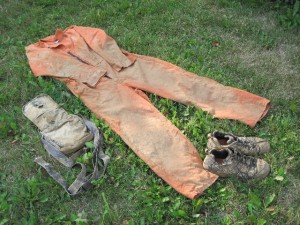 Caves are generally pretty dirty places and require cavers to dress accordingly, to that end we find that in a lot of the photos we come across, cavers are wearing coveralls.

This week we want to get a handle on how common coveralls really are, and to find out, are coveralls the unofficial caving uniform?

Are you a coverall wearing caver? Let us know by answering the poll and commenting below what else you wear if not coveralls.

Do you wear coveralls while caving?

We had a very clear answer in last week’s poll with over 80% of respondents answering that geocaches should not be put in caves.

Some excellent arguments were put forward in the comments.

On the “for geocaches in caves” side, Neptuno, made a good point that “everybody has the right to go in caves since they don’t belong to a closed group of cavers”.

Perce Lister suggested that “It’s ok to use cave entrances as part of the Geocache clue, but not to lure potential seekers into the caves themselves.”, though Ken DeJonge believed that “the lure of what lies beyond is too great.”

Non cavers do not realize that a wild caves are lurking death for people with no caving experience.James

Peter Youngbaer, the NSS WNS Liaison, chimed in with an excellent point that non-cavers are generally out of the loop about WNS and decontamination procedures, and many geocachers travel all over searching for the elusive next cache.

Furthermore, there was a concern that listing the locations publicly on geocaching.com could lead to “parties, graffiti, bat killings, etc.”

Thanks to everyone who responded and especially those who took the time to comment.