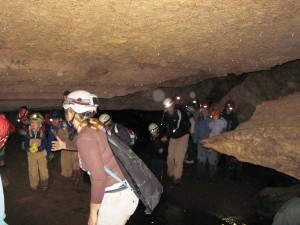 Though there is no exact word or phrase in Yucatecan for “hello,” I suppose it would suffice to say Ki’imak in wo’ol in wilikech (Happy to see you)!

Wednesday was, indeed, International Day at Mayacon… with an all-day plenary session on International Exploration. Presentations were given from several well-known international project cavers in countries like Haiti and Cuba, China and Australia, and several presentations in various states in Mexico. One sad thing that was a theme regarding Mexican caving is that many of our favorite states are now in the midst of an upheaval, and we can only hope that these areas will once again be a viable destination in the future. In the meantime, states like Oaxaca, Yucatán, and Quintana Roo remain both viable and productive caving destinations. 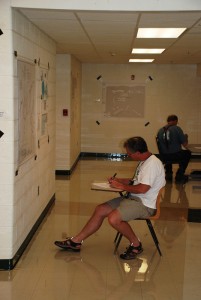 Wednesday was also a day for learning and perfecting techniques in cave photography, and even a rock breaking workshop, with both of these workshops having part or all of their class occurring out in the field. Wow!

But if one wasn’t dreaming of the next big discovery abroad, or learning how to take that Salon-winning photo, or busting up some rock with the flick of a hammer, the Congress of Grottos was holding its annual meeting. This was far from a boring affair, as there was a bold proposal by the Battlefield Area Troglodyte Society (BATS) aimed at helping grottos be all that they can be. Grottos are, indeed, the Society’s front line in terms of outreach and service, and it is hoped that with this proposal grottos can begin to share what makes a grotto successful, and in a larger sense the whole society. 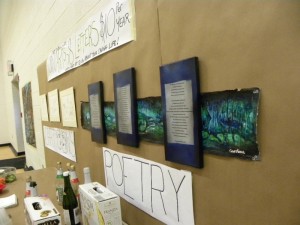 Wednesday evening featured the Speleo-Auction fundraiser, where over $5700 was raised to support both the NSS HQ effort and Conservation activities
.
On Thursday, this author decided to take advantage of the amazing caving opportunities to be had in the Greenbrier Valley… Taking an excursion to a multi-drop vertical cave just a short drive from the Convention site. Among the more interesting and unexpected features of this particular cave was a layer of black-striped white marble located at the top of the first pit! After discussing the find with a geologist friend, it seems that the most likely explanation was that hot molten rock had been forced up into layers of limestone, causing the metamorphosis of limestone into marble; A process known as contact metamorphosis. There is no doubt that the geology here in the Greenbrier Valley is as interesting as it is complicated. It was entirely appropriate that this day’s Luminary was the venerable geologist, Dwight Deal, who gave a compelling seminary on calcite and its amazing history and properties. 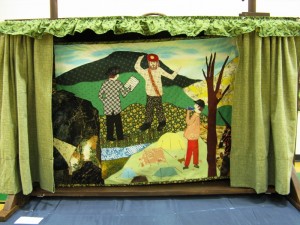 Meanwhile, as my personal geology lesson was unfolding, the day belonged to Geology in the plenary sessions, as well as sessions in vertical caving along with safety and techniques, and meetings of the Cave Diving Section and Digging Section.
Mayacon 2012 reached its apex on Thursday evening with the presentation of awards at the Salon Awards Show. This show is a multi-media exposition of the best of the caving-associated arts, and the Photography entries were particularly competitive this year. And while photographer Kevin Downey walked away with top honors in the Photo Salon, Janet and Roland Vinyard stole the show with their “Cranky,” a 26-foot long quilt featuring a graphical story line. This quilt loaded onto a spool which is then turned (cranked) while a live musician, in this case, Roland, sings a ballad of the story on the quilt.

Hopefully you all have been enjoying these updates. Wish you were here, and we’ll plan to have one final installment for Friday, the final day of Mayacon. So, from Lewisburg… Taak saamal (until tomorrow).