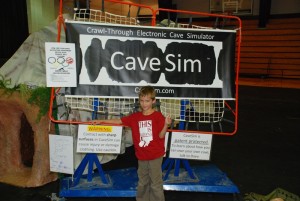 Since Opening Day on Monday, things at Mayacon have been hopping non-stop. All of the salons, are now in full bloom, and the entries in all categories has been extremely impressive. In addition, the Vertical Contests began and the Gymnasium was buzzing all day with applause, and some eruptions of cheering as new speed records were being set in both men’s and women’s categories.

Also located in the Gymnasium this year is the CaveSim, which is the site of this year’s Speleolymics, adding a new dimension of cave protection, rather than an emphasis on sheer speed to this event. CaveSim is a realistic crawl-through cave model which is outfitted with computer sensors in the form of artificial speleothems. As one moves through the CaveSim, any contact, incidental or otherwise, gets recorded along with the overall time it takes to navigate the twisting and turning passage. 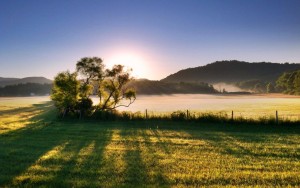 Monday also saw the start of the plenary sessions and symposia, which included sessions on Virginia and West Virginia cave exploration, Human Sciences, Communications & Electronics, along with Survey & Cartography. And there were activities for kids of all ages. The Junior Speleological Society (JSS) is a youth-specific program designed to get kids ages 6 and up involved in activities which help them to learn about caves and cave life, all while having fun and making new friends.

Not all the activity, though, was to be found on the Convention Site… Many of the Convention participants took to the hills to experience the outstanding caving opportunities which the Greenbrier Valley offers. And so by afternoon, the most popular site on the Convention grounds was the decontamination station. Without a doubt, cavers who are out and about are taking their obligation to decontaminate very seriously. 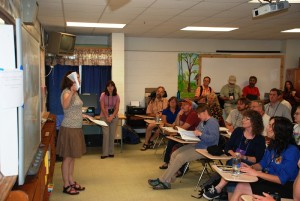 Once the day’s activities were completed, it was time to gather for the annual Howdy Party, and this year’s theme is “Wild, Wonderful West Virginia.” With a background of bluegrass music by the band, Jugbusters, a crowd easily over 1,000 people gathered to enjoy a dinner, drinks and camaraderie.

Tuesday morning picked up where Monday left off, without skipping a beat. JSS was in full swing, as the NSS President, Wm Shrewsbury and Convention Chairman John Pearson resurrected a former JSS tradition called “Cave with the Prez.” This is where JSS participants have the opportunity to go caving with the NSS President. All indications were that the event was a tremendous success and everyone had a fantastic time! 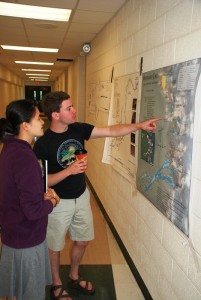 The Tuesday plenary sessions featured a very strong line-up, with topics ranging from U.S. Exploration, Conservation & Management, Spelean History, Biology, and a 3-D Image gallery. It was also a day for important discussion regarding the most recent updates and management strategies to deal with White-Nose Syndrome. In particular, a strong message that the NSS can and should be a legitimate partner in the quest to protect caves even in this WNS-plagued time came in the form of a truly compelling presentation by Huntsville Grotto’s Jennifer Pinkley, titled “The Unintended Consequences of Cave Closures: A Story About Fern Cave, Alabama.”

As if all this wasn’t enough, Tuesday also saw the inauguration of a new “Luminary Series” of presentations, featuring cavers who, over the years have proven to be true greats—luminaries—in the worldwide caving community. The first of this series featured a presentation by Jeanne Gurnee, NSS 1908, whose caving and speleological work over more than five decades has taken her to more than 40 countries on 6 different continents.

Convention is now clearly firing on all cylinders… and with a whole lot more to come!