MayaCon 2012: The NSS Convention is coming to West Virginia 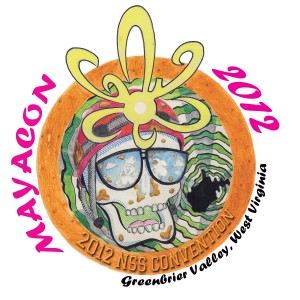 Many West Virginia cavers understand their region to be emblematic of the passion that drives them: historic, demanding, stingy in its willingness to share awe-inspiring treasures, and capable of holding secrets in every fold of the rock.

This year’s NSS Convention, June 25-29, in the Greenbrier Valley of West Virginia, is an opportunity for those cavers to share the gospel of their region, showcasing scenic wonders such as the Bone-Norman Cave System; huge cave systems like Friars Hole; historic discoveries such as those in the Organ Cave System; and, ongoing projects including The Hole, Maxwelton Sink Cave and Culverson Creek Cave System.

With more than 1,300 known caves in West Virginia, including nearly 400 miles of cave in Greenbrier County alone, there’ll be no shortage of time or opportunity underground.

Time above ground will be just as entertaining. Lewisburg was recently named America’s Coolest Small Town by the readers of Budget Travel magazine. Shopping, arts — including a special professional performance run of “Floyd Collins – The Musical” — antiquing and historic attractions are everywhere in Greenbrier County, home of the world-famous Greenbrier Resort.

This year’s Convention schedule includes classic events cavers have grown to love, such as the great Howdy Party, Thursday night Salon presentations and Friday’s Banquet. In addition, MayaCon 2012 will include a College Student Reception, a MayaCon Renaissance Party after the Banquet and “Connecting the Arts” Workshop that joins the arts to conservation.

Session-wise, the popular U.S. and International Exploration offerings return, along with a session dedicated to exploration in the Virginias. as well as a number of other topics. An hydrology-based post-convention field trip is also on tap.

Convention activities will be held at the West Virginia State Fairground, the adjoining Greenbrier East High School and Eastern Greenbrier Middle School. There’s ample room for camping and parking within close proximity to every event, and plenty of hotels, motels, restaurants and eateries nearby.

Cavers who pre-register for MayaCon 2012 by May 1 will save $30 off the regular registration fee, so it pays to sign up early. It’ll pay if you’re a student, too: MayaCon 2012 is the first NSS Convention to offer a student discount. Registration information and materials are available at nss2012.com.