The Unforeseen Consequences of Cave Closures 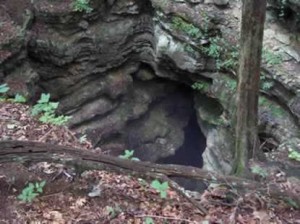 Jennifer Pinkley, a caver, freelance writer, photographer and a big fan of Alabama’s Fern Cave has written a story that examines the unforseen consequences of the U.S. Fish and Wildlife Service’s White-Nose Syndrome cave closure policy.

As part of the blanket closure Fern Cave was closed in March 2009. Since then, cavers would only visit once a year, by rappelling through one of the entrances to check if the bats had WNS.

This past July however, a special permit was issued to a biologist looking analyze bat guano cores in the cave. Since few people actually knew where the giant guano piles are located, Jenifer and her husband Steve Pitts were asked to collect the samples. 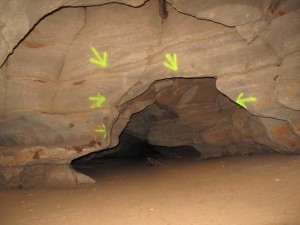 Entering through a different opening than the cavers checking for WNS, the two quickly noticed graffiti adorning the walls and ceilings of the once pristine cave. Arrows had been spray painted directing folks almost the entire way to a roost of endangered gray bats.

Further trips were soon organized to clean the cave and during them more graffiti, inscriptions and torch marks were discovered throughout the cave, some even covering delicate gypsum crust and active popcorn formations.

It appears that in Fern Cave at least, the cave closures have made the cave and the bats much less safe, keeping out the responsible cavers and allowing vandals, and sightseers with flashlights free rein.

“the cave closure policy is in fact accomplishing one thing: it’s allowing people with spray paint and no conservation ethics to freely explore and vandalize of one of the most spectacular caves in the southeast and one of the most important bat hibernation caves in the country.”

To read Jennifer’s complete article check it out on her website, or wait for an upcoming issue of NSS News.