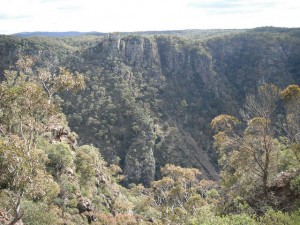 The scenario involved rescuing an injured caver from Pitch 4, a 14 meter (46 foot) high wall, and bringing them to the surface.

The exit route required the team to negotiate an area known as ‘Flattener’, a very tight squeeze, and the ‘Keyhole’, a narrow opening at the cave’s entrance.

With hundreds of tourists also visiting the more than 190 caves in the Bungonia system each year, there is a strong potential for a future rescue to be a real one.

The cave system is mainly vertical, very ‘sporty’, and a popular cave for intrepid adventurers and cavers. It also has the perfect atmosphere for a cave rescue, so we decided to conduct an extrication exercise in here, to determine how long it would take to retrieve a casualty in a stretcher. Joe Sydney, NSW Cave Rescue Squad Captain

All told, the exercise took the 17 cave rescuers 12 hours to complete.