Ancient Use of Sandstone Caves in the Brazilian Amazon: Dark Zone Rock Art 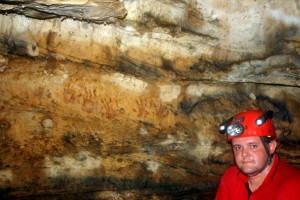 In May 2012, Dr. Luiz Eduardo Panisset Travassos and his PhD student Bruno Durão Rodrigues went to the Brazilian Amazon Forest to register the probable first Brazilian case of rock art paintings in the dark zone of a cave.

Together with Rodrigo Motta, a speleologist from the region, the team identified hand printings and zoomorphs 350 meters (1150 feet) from the entrance of the “cavernas das Mãos”, in the municipality of Rurópolis, Pará, Brazil. These are considered to be the first known example of such drawings. 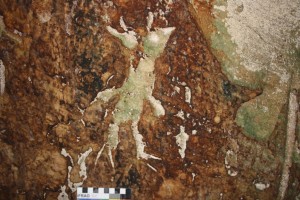 In Brazil, cave paintings near entrances or in the twilight zones of caves are well documented, but not in total darkness. Some examples show cave art in areas where sunlight can reach the panel at least for a period during the day as the zoomorphs pictographs at Caverna das Mãos. In its interior one clear painted zoomorph is identified.

The other interesting fact of this paintings is the kind of “sacrifice” made to reach the walls. The groups had to walk through meandering conduits as well crawl passages in order to make the paintings. It is a clear sign of a ritual performance.

The researchers are now preparing a paper about this cave and five others with pictographs and cave paintings.

About Luiz Travassos
Dr. Travassos is a geographer who holds a Master's and a Doctoral degree in Geography. In 2011, he earned another Doctoral degree, in Karstology, from the University of Nova Gorica, Slovenia. He does physical and cultural research on karst regions and caves.
Sorry, comments have been closed.