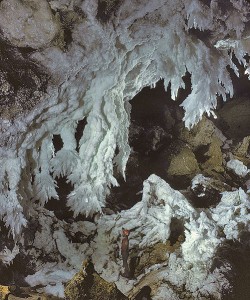 Researchers studying microbes that live deep inside New Mexico’s Lechuguilla Cave have discovered bacteria that are naturally resistant to antibiotics.

Part of Carlsbad Caverns National Park, Lechuguilla Cave was first discovered in 1986. In order to protect the cave’s natural features, including its microbial life, access into the cave is limited to about one hundred explorers and researchers each year. That limited access has made the cave a perfect source for uncontaminated, isolated microbes and has allowed researchers to conclusively determine that these microbial communities have been isolated since before antibiotics were first used by doctors.

The research paper, titled “Antibiotic Resistance Is Prevalent in an Isolated Cave Microbiome” has been published today in the journal PLoS ONE.