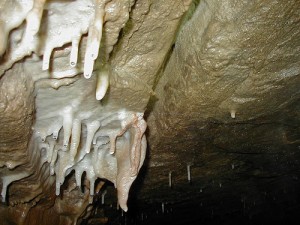 After nearly 50 years, a one meter (three foot) tall stalagmite is back home in West Virginia’s Mystic Cave.

The 45 kilogram (100 pound) stalagmite, which had spent time supporting a bird bath, had been stored – as it had been for for much of it’s time since leaving the cave – in Glen Sarvis’ barn near Mechanicsburg, West Virginia.

The likely already broken off stalagmite was collected from the cave around 1962 or 1963 by a friend of Glen Sarvis. From there it traveled to Shippensburg State College where it was displayed in the window of the bookstore in the fall 1963. Around 30 years later it arrived at Glen Sarvis’ barn where it stayed, even after the death of its collector, until recently.

It was returned to the cave this past October by members of the Franklin County Grotto who, once they had cave owners permission, carefully wrapped up the speleothem and made the three-hour drive to the cave.

After an ordeal to get the stalagmite to the Formation Room, it was erected among chunks of broken travertine to help keep it upright.

The impetus for its return was the noble concern that a stalagmite in private hands might unintentionally encourage people to collect them.

To help further discourage their removal, there is now a cave protection law in West Virginia with fines up to $500 USD and six months in jail for anyone disturbing a cave formation without the cave owner’s permission.