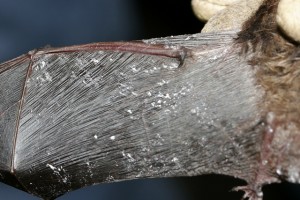 There is concern in New Brunswick after initial inspections on bats this winter have led to the discovery of three new white nose syndrome infected sites.

Ten to thirty percent of the bats examined at the sites were already showing the characteristic white fungus on their muzzles or wings.

Diseased bats being found this early in winter worries Donald McAlpine, research curator of zoology at the New Brunswick Museum, due to the fact that WNS often doesn’t become evident until late winter/early spring.

First discovered in New Brunswick in March 2011, the only infected site – coincidentally the largest hibernaculum in the province – saw 90 percent of the estimated 6,000 bats killed.

As part of a program to track white nose syndrome, McAlpine and University of New Brunswick graduate student Karen Vanderwolf have been monitoring the bats and trying build a database of pre-WNS bat data in order to get a sense of fast the disease will be spreading and it’s recovery rates.

Their research is especially important because Canada’s most common bat species, the little brown bat, also happens to be the species most affected by white nose syndrome.