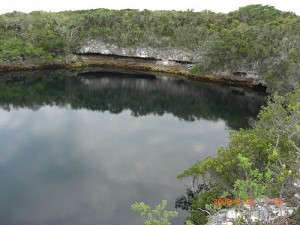 Recent discoveries made by researches from Texas A&M University at Galveston are providing a glimpse into how life formed in the Earth’s oceans, millions of years ago.

The researchers have been studying the bacterial microbes that live within blue holes in the Bahamas. With more than 1,000 water filled sinkholes, the Bahamas has the greatest concentration of “blue holes” in the world.

In the three underwater caves studied so far, they’ve discovered amazing variations between the caves, each having evolved specialized forms of life at different depths.

“One on Abaco, at a depth of about 100 feet, had sheets of bacteria that were attached to the walls of the caves, almost one inch thick. Another cave on the same island had bacteria living within poisonous clouds of hydrogen sulfide at the boundary between fresh and salt water. These caves had different forms of bacteria, with the types and density changing as the light source from above grew dimmer and dimmer.”

“In the cave on Andros, we expected to find something similar, but the hydrogen sulfide layer there contained different types of bacteria,” he adds. “It shows that the caves tend to have life forms that adapt to that particular habitat, and we found that some types of the bacteria could live in environments where no other forms of life could survive. This research shows how these bacteria have evolved over millions of years and have found a way to live under these extreme conditions.” – Tom Iliffe, Professor of Marine Biology at Texas A&M in Galveston

Acting as natural laboratories, the caves provide a place to study in conditions that would have been present on earth millions of years ago, giving a glimpse of how life evolved on this planet.

The research, done in conjunction with folks from Penn State University, has been published in a recent issue of Hydrobiologia, The International Journal of Aquatic Sciences.