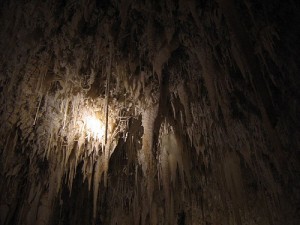 Declining groundwater levels in south-western Australia may result in the extinction of the aquatic creatures that live within the areas caves.

Recent research published in the Journal of Australasian Cave & Karst Management Association by Dr Stefan Eberhard and Ms Sarah Davies indicates that between 95 to 98 per cent of the known habitats in Australia’s Jewel and Easter caves has been lost in the last 15 years, and that a complete loss is predicted within five years.

The main cause of the water decline is reduced rainfall experienced in the South West since the mid 1970s Dr Stefan Eberhard, Director of Subterranean Ecology Pty Ltd.

The two caves, part of the Jewel Cave Karst System, are home to two unique and critically endangered species of stygofaunal crustaceans.

The watertable in the Jewel Cave Karst System is at the lowest level ever recorded, being 2.5 m below the maximum level recorded since historical measurement commenced in 1958, and 0.6m below the lowest palaeo (Pleistocene) level for which any dated stratigraphic evidence exists, Dr Stefan Eberhard, Director of Subterranean Ecology Pty Ltd.

Preliminary hydrological modelling has suggested that rainwater harvesting at Jewel Cave may be able to help slow down the groundwater decline.

Although the Department of Environment and Conservation has recommended against the plan, assuming that lower water tables have existed in the past, Augusta Margaret River Tourism Association and Subterranean Ecology Pty Ltd have secured funding to investigate the feasibility of a recovery program at Jewel Cave.