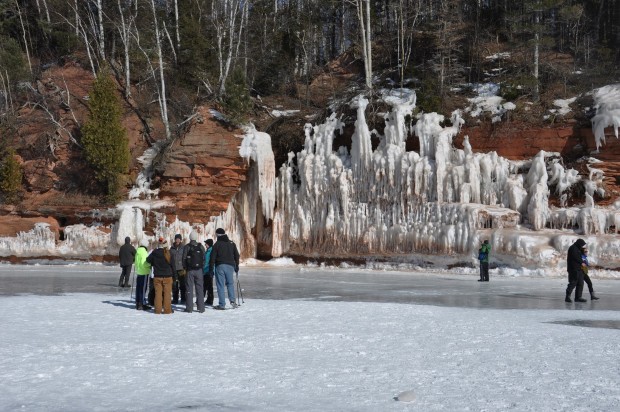 The new Special Recreation Permit fee for visitors to the Apostle Islands National Lakeshore ice caves is being touted as a success after it covered the costs of the nine-day event.

The daily fee of $5 per person for those 16 and older was instituted this year as a cost-recovery measure, and funded the costs of assuring that the experience was as safe and enjoyable as possible.

In 2014, the polar vortex brought 138,000 visitors to the ice caves over an eight-and-a-half-week season. The expenses of managing the caves’ unanticipated popularity far outstripped the park’s budget, however, requiring one-time assistance from the NPS regional office. Making the ice cave operation financially sustainable was a critical need.

In contrast, the 2015 season was much shorter. Thirty-seven thousand eight hundred visitors came in just nine days but the park staff were better prepared and immediately ready to handle the now-expected crowds.

With the new fee in place, the park collected about $140,000 in revenue in 2015. A small percentage of all park fee revenue is shared with the NPS national office to administer the program. That left $134,700 for the park’s use locally.

Not including the salary cost of year round staff who worked the ice caves, the NPS spent about $95,000 on this year’s ice cave event. Those funds paid the costs of temporary hires; overtime for some year-round staff; travel costs for rangers who came from other parks; rental and service of toilets; emergency rescue equipment, supplies, servicing, and fuel; fee envelopes and accounting; temporary signs; and landscape and stairway rehabilitation once the snow melted.

Approximately $21,000 has already been invested in preparation for future ice cave seasons, specifically on improved personal protective equipment for cold weather safety; printing of new fee envelopes; and a heated “snowbulance” to better serve people needing rescue out on the ice.

The remaining funds stay locally at the Apostle Islands and are combined with fee revenue the park brings in from overnight camping and docking, parking, and lighthouse tours. The surplus this year will allow the park to bring temporary staff on board to prepare for the next ice cave season prior to the actual opening date, and for other visitor services, with the priority going to the Meyers Beach area. Two projects are planned for 2015: One project, which will combine fee revenue and a partner contribution from the Friends of the Apostle Islands, will be to purchase and install a National Park entrance sign at Meyers Road. The other project will install a 42-foot bridge over a deep ravine on the Mainland trail east of Meyers Beach.

The National Park Service estimates, that on a national basis, every $1 invested in the National Park System returns more than $10 to the American economy. As evidence of that, the ice caves have been a boon to the northwestern Wisconsin area the last two winters.

The National Park Service may be the public face of the ice caves, but this amazing experience would not have been possible without everyone in our community working together. We are very grateful to the many local, tribal, state, and federal agencies and organizations that contributed their own resources to make this a safe and enjoyable event for the area’s visitors. Bob Krumenaker, Apostle Islands National Lakeshore Superintendent