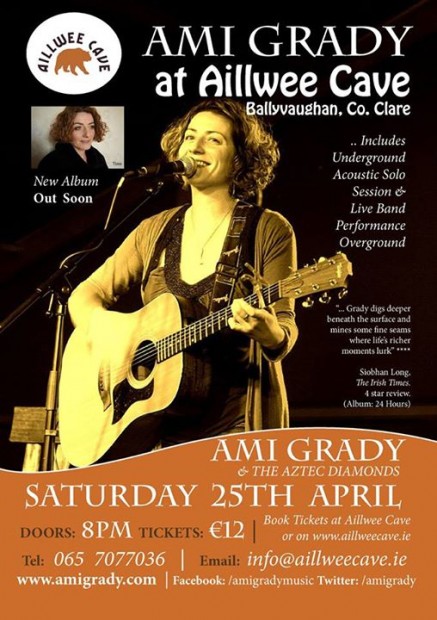 As part of a tour of Ireland supporting her upcoming album, acclaimed Irish singer songwriter Ami Grady will make a stop at and in Aillwee Cave on April 25th.

The evening will begin at 8:00pm in the cave’s Highway cavern where Ami will perform a 30 minute solo session in the natural acoustics of the cave. She will then join her band, the Aztec Diamonds, on stage in the cave building for the main performance.

Known for her soulful, acoustic songs which range from the quirky to folk to country, Ami has received four star reviews in Irish Times and Hotpress. She has two albums to her credit, Precious Lines and 24 Hours, the most recent produced with Grammy Award Winner Malcolm Burn. Her third album upcoming album, ‘Time’, will be released in Whelan’s in Dublin on May 23rd, however limited copies will be made available during this concert.

For more information and to buy tickets to the concert, visit the Aillwee Cave website.