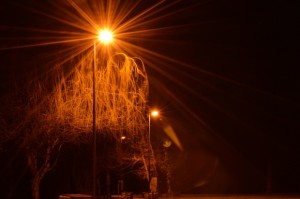 Lights may not attract bats after all.

New research has discredited the popular belief that street lighting is attractive to bats.

The study, carried out by scientists from the University of Exeter and Bat Conservation Ireland, found that bat activity was generally lower in street-lit areas than in dark locations with similar habitat.

The findings have important implications for conservation, overturning the previous assumption that common bats benefited from street-lights because they could feed on the insects that congregated around them.

People rarely see bats, and when they do it is usually because they are silhouetted by a light. Because clouds of insects accumulate around lights, there has been an assumption that the bats were getting an easy lunch. What our work shows is that they are actually usually just as active, if not more so, in adjacent dark areas. We already knew that lighting was bad news for rare species such as horseshoe bats. Now we have demonstrated that, for the common species of vital importance to our ecosystem, lighting is not helpful. Over recent decades, the number of streetlights, and the brightness of lighting, has grown enormously. We also use increasingly powerful lights to illuminate outdoor areas around our homes. We urgently need to reverse this trend. Dr. Fiona Mathews, University of Exeter

The research, published in the journal Philosophical Transactions of the Royal Society B, found that the activity of soprano pipistrelle, noctule and serotine bats was similar or lower in areas with street lighting compared with dark areas. An increase in the activity of our most common bat, the common pipistrelle, was only seen in locations where there was also a high amount of shelter from trees or hedgerows. The only species for which lighting appeared favourable was Leisler’s bat, a species common in Ireland but rare in Britain.

Leisler’s bat is considered very special in Ireland since its population here is of international importance, so it is good to know that this species at least may not be so negatively impacted by street lighting. Nonetheless, we are extremely concerned that, with just one out of our nine Irish species showing a positive association with street lighting, much more needs to be done to lessen negative impacts of lighting. This can be achieved by considering lighting scheme designs more thoroughly from the planning stage. Dr. Niamh Roche, Bat Conservation Ireland

The research analysed large-scale surveys conducted in Britain and Ireland, involving more than 265,000 bat calls at over 600 locations. The links between lighting and bats were explored at several spatial scales including car-surveys conducted by volunteers across Ireland, to shorter surveys conducted by bicycle, and detailed monitoring over multiple nights at specific sites.

Despite frequently being depicted as blind, bats have good eyesight that is adapted for low light conditions.

When we walk out of a lit house into the dark, it takes a while for our eyes to adapt to the darkness. The same is true in bats – they are dazzled by bright light and it takes time for their eyes to re-adjust. This could affect their ability to navigate. In addition, it seems that their ability to hunt insects is reduced in the light. So although a bat may be seen flying round and round a streetlamp, it may actually be struggling to catch anything. Dr. Fiona Mathews, University of Exeter