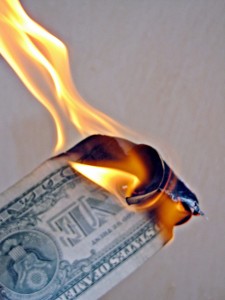 A group of cavers recently recovered a wallet that has been missing for 17 years.

The group of six cavers from the Niagara Frontier Grotto had just begun exploring a cave under the Veterans Memorial Riverwalk in Watertown, New York when they made the find.

Granted special permission by the city, the team entered the caves which had, until recently, been sealed with concrete following a 1996 incident where two explorers spent two days stranded underground.

Joseph P. Sweet and companion Darren F. Blanchard became lost inside the caves on July 14, 1996, when their flashlight went out only about 50 meters (175 feet) from the entrance.

Escorted out two days later with the help of firefighters, the pair were cold, wet and showing early signs of hypothermia. During their ordeal they had burned $70.00 in bills from their wallets to keep them warm and use for light.

The tattered wallet, including all its remaining contents were scheduled to be returned earlier today to Mr. Sweet, now 36, who was surprised to hear about the discovery.

For 16 years, local man’s wallet was buried in one of Watertown’s caves [Watertown Daily Times via reader Benjamin Brown]