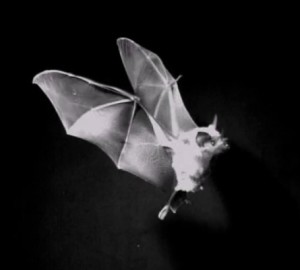 New high-speed motion X-ray videos of bats has shed new light on why bats are the only mammals truly capable of sustained flight.

They discovered their secret to flight is extra-stretchy bicep and triceps tendons that store and release the energy needed for takeoff.

This news, which they presented this week at a meeting of the Society for Experimental Biology, comes as a shock to scientists who have previously believed that the tendons in small mammals are too stiff and thick to be stretched at all.

Despite their unexpected results, the conclusion has have been confirmed with the use of fluoromicrometry, which, by injecting the bats muscles with chemical markers, allowed the researchers to measure changes in the length of the muscles during contraction and expansion.

Check out the awesome videos over at the Smithsonian Magazine.