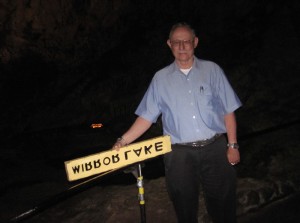 The sign, which once identified Mirror Lake in the Big Room of the cave, was brought back to the park by former Carlsbad Caverns employee, Tom Lorig.

A park guide from 1968 to 1973, Lorig had obtained the sign in 1973 when new lighted signs were installed in the cave and park employees were given permission to take old signs.

The Mirror Lake sign was the most coveted one, because of the mirror-image text that read right-side up when reflected on the surface of the pool. Tom Lorig, former Carlsbad Caverns National Park guide

Now a resident of Bothell, Washington, Lorig had been thinking about ensuring the sign’s preservation when he first decided to return it to Carlsbad Caverns a few years ago.

The opportunity finally arose this week while on a road trip to the Southwest.

The unique sign, the first of that style to be represented, will now be added to the park’s museum collection. 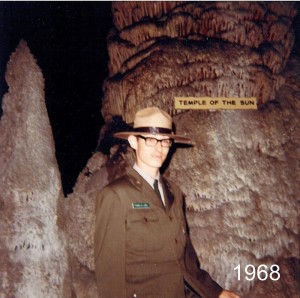 Tom Lorig standing in front of the Temple of the Sun sign in 1968. Photo via NPS

Carlsbad Caverns, like many other national parks, maintains a museum collection to safely preserve important pieces of the park’s history.

Another recent addition was a box of 35 mm slides, donated by George Eugene Hill, of Williams, Arizona, featuring the park in the summers from 1961 to 1963 during his time as a park guide.