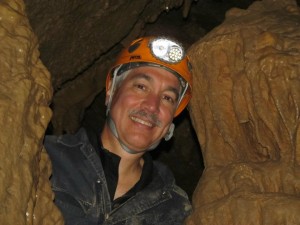 With 9 days left to spare, the fundraising campaign to benefit the Ellison’s Cave rescuers has reached, and now surpassed its goal of $5,000.

Started by friends and family of the now recovering Dwight Kempf, the caver who was pulled from Ellison’s Cave on May 27th, the campaign aimed to raise money to go toward equipment and training for rescuers to ensure that anyone else who requires their assistance, will get it.

Over 100 men and women responded to the call on Sunday, May 26th, after Kempf, 54 of Orefield, Pennsylvania, slipped and fell about 9 meters (30 feet) into a pit during a trip in Georgia’s Ellison’s Cave.

Known for its vertical pitches, Ellison’s Cave is home to the 179 meter (586 foot) deep Fantastic and 134 meter (440 foot) deep Incredible, the deepest pits in the United States.

With a broken left femur and fractured skull, it took crews 22 hours to first stabilize, including giving him an in-cave blood transfusion, and, using a number of techniques, haul him to the surface from a depth of more than 240 meters (800 feet) below the ground.

In critical condition, Kempf was then immediately flown to by Life Force helicopter to Erlanger Medical Center in Chattanooga.

Now in rehab in Atlanta, Dwight continues to make progress on the road to recovery.

As for Dwight: he continues to improve; working hard with PT on being able to get around until he is allowed to begin to put weight on the leg and get back to outdoor activities; and is making steady gains in recovery from the head injury. He still has some periods of confusion; but is largely aware of what happened, has good long term memory, and is becoming increasingly conversational with family and staff. Jill Kempf, Dwight Kempf’s Wife

Attributing the ease of reaching their goal on the immense gratitude to the rescuers for saving Dwight, and the desire to give back to them and acknowledge their unselfishness, organizers are now hoping to far exceed the original goal.

I think when [folks] see our men on a trip or at an event, they see all the good things about caving: camaraderie, skills, willingness to work hard, thoroughness in preparation and clean up…and so on. Jill Kempf, Dwight Kempf’s Wife

For more information on making a donation to this worthy cause, visit Dwight Kempf’s Angels on YouCaring.com.