No Place on Earth: New Cave Documentary Opening in Theatres 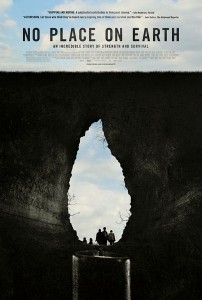 Official poster for the documentary film No Place on Earth. Image via Magnolia Pictures

A new documentary film, featuring caving, will open in theatres across the U.S. on April 5th.

The film, titled No Place on Earth, tells the truly remarkable story of five families of Ukrainian Jews who retreated into caves to escape the Holocaust during the second world war.

Their over 500 day ordeal living inside first Verteba Cave, and then the nearby 124 kilometre (77 mile) long Ozerna Cave (aka Priest’s Grotto), remains the longest known instance of uninterrupted cave habitation.

Despite the amazing experiences of the families, their story had remained lost until an American caver, Chris Nicola, discovered evidence of human habitation during explorations in Verteba in 1993.

Through interviews with Nicola and the surviving cave inhabitants, No Place on Earth finally brings to light their tale of ingenuity, willpower and endurance.