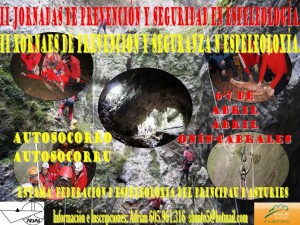 This two-day event, scheduled for April 6th and 7th, 2013, comes just over a month after the first conference which was held at the end of February.

In an effort to drive Asturian cavers to continuously improve their skills, folks attending the event will learn caving first aid and rope self rescue.

The conference will be held at the lodge Llindebobia (Bobia d’Abaxu-Onis) and the Cueva los Canes (Puertas-Cabrales) at Picos d’Europa in Oviedo.