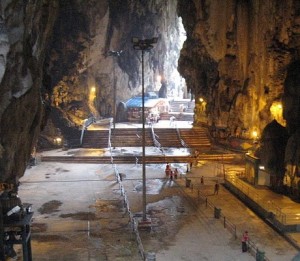 Inside Batu Caves near Kuala Lumpur, Malaysia. Photo by Agsrivaths/Wikimedia

Environmentalists believe that a construction project to build two high-rise buildings near Malaysia’s Batu Caves will have a negative effect on the stability of the cave.

The concern is that the vibrations from construction, specifically the installation of the pile foundations, of the two 29-story condominiums, positioned for a “panoramic view” of the site, will create further cracks and fissures and cause the cave, already showing signs of weakness, to collapse sooner.

Every year there is a small amount of limestone falling away from the structure, causing skylights. Lim Teck Wyn, Malaysian Nature Society Committee Member

The project developer, Dolomite Industries, is also accused of not following supposed guidelines set out by the Malaysian Minerals and Geoscience Department, which state that high-rise construction should not be done within a radius of 500 meters (1640 feet) from the limestone hill where the caves are located.

Reacting to the concerns, the state government has ordered the developer to halt construction until soil testing could be completed.

Located 13 kilometers (8 miles) north of Kuala Lumpur, Batu Caves are home to a number of Hindu Shrines that attract hundreds of thousands of visitors each year.

Batu Caves at risk of caving in [The Star Online]