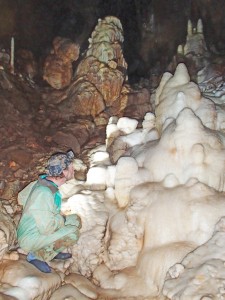 Nigel Cox in the In the “Frozen Deep”. Photo by Nick Chipchase

A group of U.K. cave diggers recently stumbled upon the largest underground chamber discovered so far in England’s Mendip Hills.

The chamber, dubbed “The Frozen Deep” for its stunning calcite formations, was discovered last Tuesday , September 4th, in Reservoir Hole, a gated cave in Cheddar Gorge.

Going on a suggestion by a local geologist, the group has been concentrating on a side passage since they began digging at the cave in 2008.

The initial breakthrough in the passage saw the connection of a 20 meter (65 foot) long rift. Following the rift, known as “Great Expectations”, the group encountered a large slab. Upon removing the slab, they were able to access a further 15 meters (50 feet) of crawling passage. That crawl eventually led to a 25 meter (80 foot) high and 20 meter (65 foot) long chamber, which they named “Resurrection Chamber”. 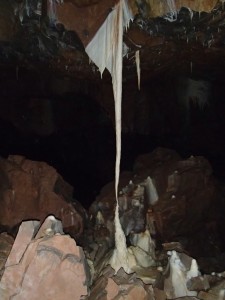 Recent explorations of Resurrection Chamber led to a loose boulder slope that ended in a 12 meter (40 foot) deep pitch. Returning last Tuesday with vertical gear, the cavers descended the pitch into a room about 30 meters (100 feet) high, 36 meters (120 feet) wide, and 60 meters (200 feet) long that contained some the most stunning calcite formations ever found in a Mendip area cave.

Flowstone covers the walls and floor of the chamber and there are hundreds of stalactites and stalagmites, including two spectacular 5 meter (16 foot) tall columns that are completely white.

Photos and further details of the discovery can be found in the press release thread over on ukCaving.com.