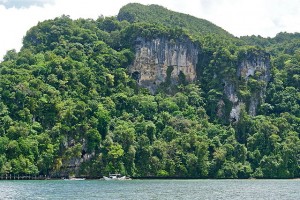 The Tabon Caves Complex was recently declared a National Cultural Treasure by the National Museum of the Philippines.

Located on Lipuun Point near Quezon in Palawan province, the 29 caves in the complex are best known for containing some of the earliest evidence of human habitation in the Philippines.

Since their discovery in 1962, archaeologists have found burial jars, earthenware, jade ornaments and other jewelry, stone tools, animal bones, and human fossils dating back to 47,000 years ago. The most famous find, a human skull, jaw bones and teeth, together which have been dubbed Tarbon Man, are believed to date back approximately 22,000 to 24,000 years.

Initially declared a Museum Reservation Site in 1972, this latest designation came after further examination by the National Museum of the Philippines which confirmed that the site is a “unique cultural property found locally, possessing outstanding historical, cultural, artistic and/or scientific value which is highly significant and important to the country and nation, and officially declared as such by pertinent cultural agency.”