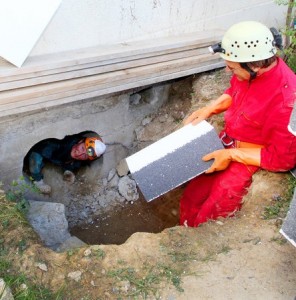 Cavers came to the rescue of Switzerland’s Temple de Plan-les-Ouates this week to help with a project to insulate its floors.

The Speleological Society of Geneva was contacted after no company would accept the challenge of installing insulation in the temple’s 50 centimeter (20 inch) high crawl space.

To make things more interesting, after the insulation was installed, the already low crawl space shrank to only 30 centimeters (12 inches) in height.

The project, which took a few days to complete, saw a dozen members of the SSG, from Bern, Jura, and even France, volunteer their time. They worked late into the evening despite the heat generated by the drills, the humidity, soil and flakes of insulation.

Although initially considered a madman when the architect on the project suggested contacting cavers, this is not the first time cavers have been called in to work in difficult locations. Members of the SSG have worked in airport ventilation ducts, under the crawl space of the Geneva Library and helped with a documentary film shot in the depths of CERN.

Income from the work will go toward equipment purchases and allow the group to maintain its low membership fees.