Colorado’s Cave of the Winds Adding a Zip-Line 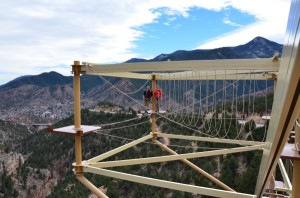 Photo via Cave of the Winds

Following the trend of adding adventure attractions to show caves, Colorado’s Cave of the Winds plans to open a zip-line later this month.

Dubbed “the Bat-A-Pult”, the 200 meter (660 foot) aerial attraction will whisk riders along beautiful Williams Canyon during the day, or like a bat, during the night.

In contrast with traditional zip-lines, the ride doesn’t end at the bottom. Riders are instead returned to the starting point thanks to a unique system.

The Bat-A-Pult joins the Wind Walker Challenge Course, a three-story obstacle course balanced on the edge of Williams Canyon, that was added last year in an effort to increase adventure opportunities at the cave, both inside and out.