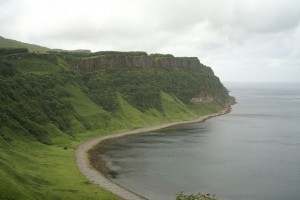 Researchers working in a remote Scottish cave have uncovered part of what may be the oldest stringed instrument yet found in Europe.

The artifact, estimated to be at least 1,500 years old, appears to be the bridge of a stringed instrument.

The discovery occurred in High Pasture Cave, on Scotland’s Isle of Skye, which has been the subject of archaeological excavations since the 1970’s. The cave, which lies about 1 kilometer (0.6 miles) south-east of the village of Torrin, has been the source of many finds dating back to the Late Bronze Age and Iron Age, more than 2,500 years ago.

The archaeological excavations at High Pasture Cave in Skye have revealed an astounding site. The work has recorded the remains of almost a thousand years of ceremony, ritual and feasting. Rod McCullagh, Historic Scotland Archaeologist

Until now, the earliest stringed instruments discovered in Europe were used by Vikings in Scandinavia, about 100 years later. It was believed that in the year 500 AD, the only instruments were wind instruments such as flutes and pipes or crude bronze trumpets.

Oldest instrument is dug up in Skye cave [Scotsman]