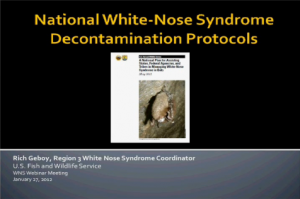 This past January, the U.S. Fish and Wildlife Service held the first of a series of webinars on white nose syndrome.

The goal of the webinar, which was restricted to state and federal agency biologists and land managers, was to allow participants to gain a better understanding of their role in the national WNS response, and learn about the most up-to-date guidance and techniques for winter WNS survey and data collection.

Although they were unable to take part in the first webinar, the National Speleological Society and cave conservancies have convinced the USFWS to put as much of the webinar as possible online (agency-specific information and proprietary scientific information was removed) and to include progressively broader audiences in future webinars later this spring, once the newest bat survey figures are in. 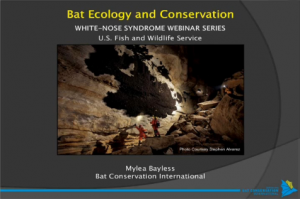 The archived online presentation is split into six sections, and runs for a total of about 1:45. You can view the webinar on the USFWS White-Nose Syndrome Webinar Series website.

Interesting to note is that the National White Nose Syndrome Decontamination Procedures presentation includes the new “hot water” method, instead of the previous “boiling water” method. This entails immersing gear in water more than 50 degrees Celsius (122 Fahrenheit) for at least 15 minutes to kill the fungus.