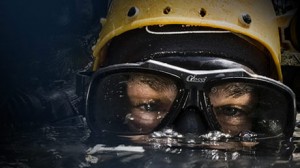 Follow a fearless team of scientists as they venture into blue holes—underwater caves that formed during the last ice age, when sea level was nearly 400 feet below what it is today. These caves, little-known treasures of the Bahamas, are one of Earth’s least explored and most dangerous frontiers. The interdisciplinary team of biologists, climatologists, and anthropologists discover intriguing evidence of the earliest human inhabitants of the islands, find animals seen nowhere else on Earth, and recover a remarkable record of the planet’s climate.

Check local listings to find out exactly when it’s coming on or visit the PBS website and click on the preview link, as we were able to watch the entire hour-long episode online.