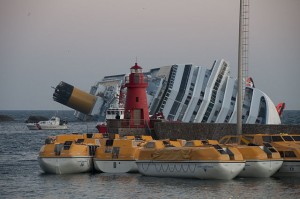 Costa Concordia, the cruise ship which ran aground last Friday now seems much more like an enormous underwater labyrinth than a modern cruise ship.

The accident on January 13th which so far claimed six lives, left the 951 foot long, and 17 deck high ship sitting off the coast of Isola del Giglio, Italy, partially capsized and half-submerged.

More than 120 rescuers are now in the process of searching for approximately 16 people who are still unaccounted for.

Participating in the rescue effort are around six cave rescue divers, who are searching the pitch dark underwater sections of the ship which are littered with debris and other difficult obstacles.

The goal of emergency personnel is to search each of the 1,500 cabins as well as all the public spaces on the massive ship, which include eight bars, five restaurants, four swimming pools, and a casino.