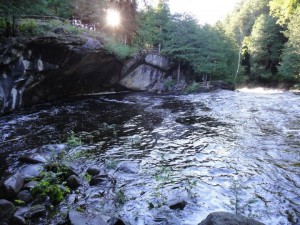 Natural Stone Bridge & Caves Park in upstate New York is closed after a huge deluge of rain and strong winds associated with Hurricane Irene, cut power and flooded the caves.

On Saturday, in advance of the storm, notice was given the caves and ice cream stand would be closed on Sunday after predictions of over 8 inches of rain and extensive flooding. A good move considering the outcome on Sunday.

The storm left the caves under water, the bridges washed away and trees down everywhere, some causing the closure of Stone Bridge Rd, the main road into the park, after falling across the power lines.

With the clean up process in full swing, the ice cream stand already re-opened, and the park is now nearly ready to open itself, albeit in a limited fashion. The main thing holding it up are the trees blocking the road. Last word from the power company is that it may not get there until next weekend.