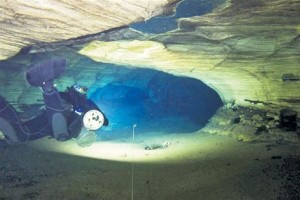 The discovery of a number of bones in a newly explored cave has challenged the belief that crocodiles only exist in southwestern Dominican Republic.

The discovery was made after locals in the area contacted cave diver and diving instructor, Oleg Shevchuk to tell him of a spring within the cave that could be explored.

Inside the cave, fossils from at least three crocodiles, as well as the bones of other creatures such as snakes were seen in the sediment.

The entrance to the 853.44 meter (2,800 foot) long cave, called Oleg Bat House, is a small narrow opening beside a fig tree. Descending 13 meters (43 feet) inside, the cave opens into a large room, filled with bat guano from the thousands of bats that live in the cavities in the ceiling.