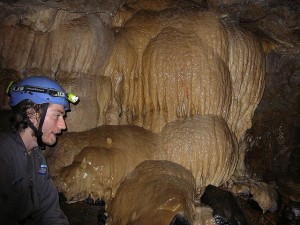 On August 9th, the new center which is housed in a former portable classroom opens for visitors. Featured inside are interpretive panels, a display of historical caving equipment and a video of the caves.

Approximately 10,000 visitors a year venture underground on tours, but that only accounts for 1/3 of the visitors to the park. The hope is that the new center will allow the other 2/3 of visitors to get a glimpse of some of the best decorated caves in the country.

One of the caves in the park, Riverbend Cave, contains a seven-storey-tall underground waterfall in its 384 meters (1260 feet) into the side of a mountain.

Vancouver Island has the highest concentration of caves in British Columbia, with over 1,400 known caves.