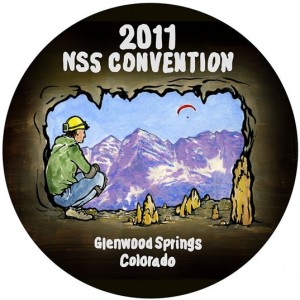 An afternoon session at last weeks National Speleological Society convention was devoted entirely White-nose syndrome. The Wednesday discussion entitled, “White Nose Syndrome — A Western Perspective” included many federal and state wildlife and land management agency officials and scientists who are assessing the risk that the disease could move west.

One of the major questions asked during the event was what impact humans might have in spreading the disease.

Peter Youngbaer of Vermont, the official NSS liaison on white-nose syndrome evidence that humans are responsible for spreading the disease is purely “speculation and hypotheses,” while Ann Froschauer of the U.S. Fish and Wildlife Service indicated “There is strong evidence that the fungus that causes the disease can be transported by humans,”.

At any rate, while cavers share the concern about white-nose syndrome and the future of bat populations, they question the policy of closing caves as a preventative measure.

It was suggested that the western states would be less likely to see the scale of devastation in bat populations as the eastern United States. This is due to a different climate, smaller colony sizes, and much fewer caves. Another factor in their favor is that the land where caves exist is controlled by the U.S. Forest Service and Bureau of Land Management.