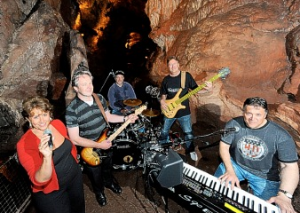 Photo via This is Devon

The Darkside of Pink Floyd, a Pink Floyd tribute band played two sold out shows this past Saturday inside Kents Cavern. Besides performing nearly the entirety of Dark Side of the Moon, the band played plenty of other favourites as well.

The band set up at the base of Grand Cavern, with attendees standing on the slope above them. A large projection screen provided visuals to all who were not able to see the band, which was anyone beyond the first few rows. Though most people likely came to hear the impeccable sound in the crystal clear acoustics of the cavern.

The two hour long concerts went of so well that there is already talk of a return visit by the band. If this event was any indication, fans will need to get tickets early.

Kents Cavern is a show cave in Torquay, Devon that attracts ~80,000 visitors a year.