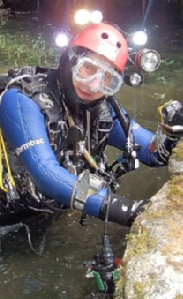 Photo via This is Somerset

John Buxton of Bedford chose to spent his 80th birthday cave diving in the Wookey Hole Caves. This feat may have set a new world record for the oldest human ever to take part in a cave dive.

​During the dive, Mr Buxton, who started cave diving since 1953, managed to swim more than 2,000 meters (6,561 feet) and visited 21 of the 22 underwater chambers in the system. Only turning back due to an air leak.

A caver first, he got into cave diving after finding flooded cave passages and wanting to continue exploring them. When he first started, divers were using diving suits and re-breathers used by submariners in the second world war to escape from damaged submarines.

Besides the U.K., Mr. Buxton has cave dived in the Bahamas, the United States and Mexico. He has no intention of hanging up his air tanks anytime soon.