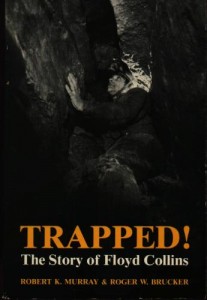 The story of Floyd Collins, a farmer who was trapped in Kentucky’s Sand Cave during the winter of 1925 is once again destined to become a movie. Producer Peter R.J. Deyell and American Biograph Films have acquired the movie rights to a book based on the event “Trapped! The Story of Floyd Collins” written by Robert K. Murray and Roger W. Brucker.

One of the most sensational new stories of the era, it attracted thousands of spectators. Floyd Collins was hopelessly buried alive while exploring the cave. While rescuers were able get to him, talk with him, even feed him and wrap his shoulders in blankets, no one could get him out.

During the ordeal a reporter from the Louisville Courier-Journal, William “Skeets” Miller visited Collins and interviewed him. His stories were syndicated by the Associated Press and carried on the front page of virtually every newspaper in America, eventually winning Miller a Pulitzer Prize for his coverage of the event.

Floyd Collins inspired songs, books, a stage musical and the 1951 movie “Ace in the Hole”, starring Kirk Douglas. However, the film and other accounts of the event were based on inaccurate newspaper stories, exaggerations, and rumors.

“Trapped! The Story of Floyd Collins” is widely regarded as the most accurate telling of the Collins tragedy. While researching for the book, authors Murray and Brucker studied hundreds of documents and interviewed dozens of eyewitnesses, some of whom were involved in the rescue attempt or knew Floyd Collins personally. Brucker even risked his life crawling into the cave where Collins died, which no one had done since 1925, to understand why rescue efforts failed.