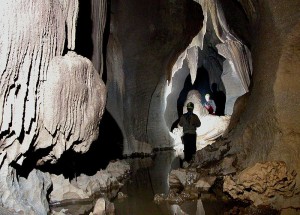 A recent expedition to the Meghalaya area in the North East of India has yielded impressive results. A group of 21 European cavers explored 11 new caves and 4 previously visited caves which led to 9.5 km of new cave passage being mapped.

The February 7-24 expedition brings the total length of mapped cave passages in the region to 364 km, with still nearly 500 of the 1,304 caves yet to be explored.

During the expedition, two biologists on the team recorded and documented 16 species of bats and 100 species of birds.

Meghalaya is known for its caves, which are thought to number in the thousands. A number of them are notable for being some of the longest and deepest in the world.