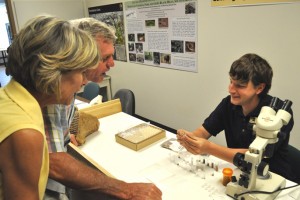 Derek Jurestousky, from The Mammoth Site, talks about the microfossils found in Persistence Cave to visitors at Wind Cave National Park. Photo via NPS

A special evening to update the public on the fossil discoveries at Persistence Cave is scheduled for this Saturday, July 25th at Wind Cave National Park.

The evening reception and program, held in partnership with The Friends of Wind Cave National Park and The Mammoth Site of Hot Springs, features a presentation by Dr. Jim Mead, Site Director of The Mammoth Site, and Chair of the Department of Geosciences at East Tennessee State University.

In early June, Dr. Mead supervised a two-week field camp to remove sediment from Persistence Cave. During the dig, the cave was found to contain ice age fossils, potentially dating back 11,000 years. There is hope that the fossils will provide clues of past climates and help researchers study how animals have adapted to changing environments.

Following the presentation, there will be a brief update on efforts to expand the small cave whose passages are blocked by washed in sediment.

First discovered by Marc Ohms, Wind Cave National Park’s Physical Science Technician in 2004, Persistence Cave is currently less than 45 meters (150 feet) long and only .6 meters (2 feet) high. However, the cave’s strong airflow indicates a potential to connect with nearby Wind Cave. Its entrance is gated and the area closed to the public.

In addition to Saturday’s event, every Wednesday and Thursday during the summer, staff from The Mammoth Site will be at the Wind Cave Visitor Center sorting through fossils and explaining their work to the public.