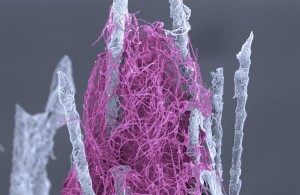 New research has identified a tissue-damaging protein that is likely responsible for the wing degradation of bats who suffer from white-nose syndrome.

In a paper, published in the Proceedings of the National Academy of Sciences, scientists at UC San Francisco and Brown University attempted to understand the digestive capability of this Pseudogymnoascus destructans, the fungus that casues white-nose syndrome.

The fungus feeds itself by exporting digestive enzymes and then importing the break-down products, in a process called extracellular digestion.

After identifying all of the exported enzymes, they found one enzyme that could digest collagen — a protein which forms the support structure of tissue. They named this enzyme Destructin-1, and searched through the scientific literature to identify inhibitors that could block its action.

They tested one called chymostatin and found a 77 percent reduction in collagen damage after 54 hours compared to controls that were not treated chymostatin.

It suggests the fungus is exporting other substances that can degrade collagen. Richard Bennett, PhD, Brown University Asociate Professor of Microbiology and Immunology

Going forward, the group plans to screen other compounds to find more effective blockers of Destructin-1 and to begin using real bat tissue instead of their current commercial source of collagen.