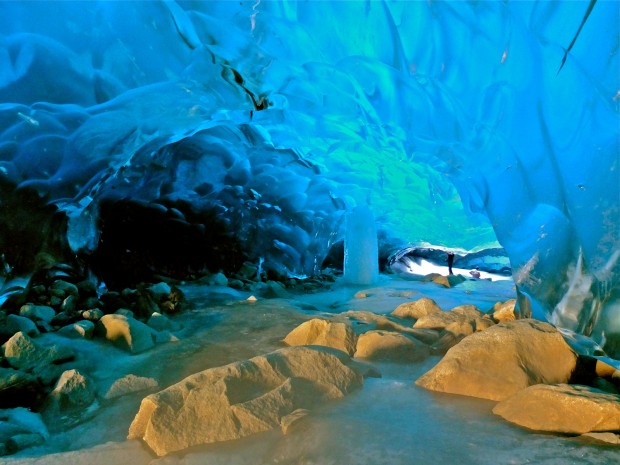 Inside an ice cave in Alaska’s Mendenhall Glacier. Photo by Umnak/flickr

Two Thai hikers are safe after getting lost on a trail near Alaska’s Mendenhall Glacier this past weekend.

KTOO Public Media reports that the couple from Bangkok were trying to visit the glacier’s now-collapsed ice caves when they lost the trail.

The couple called for help around 10:00pm on Saturday and relayed they were approximately two hours out from the West Glacier Trail trailhead in a rocky area with a waterfall. They were equipped with warm clothing, a flashlight, a few supplies and a half-dead cell phone.

The two were found by the teams, tired and cold but unhurt, at the base of a cliff. They refused medical attention and planned to recuperate in their hotel on Sunday.

We would much rather have a search for people that are not confident in their own ability or get themselves in a bad position. We would rather have a trained search group working that (case) than have these folks try to get themselves out or not contact us because they are embarrassed and don’t want to use the resource, and then something tragic happens. Andrew Neason, Alaska State Trooper