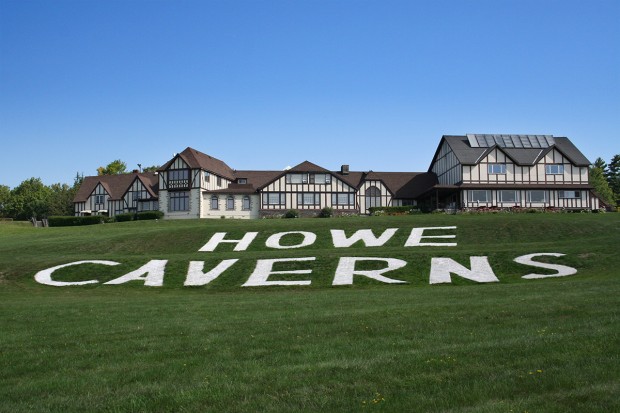 The new 2.5 hour exploration tour, which officially opens on May 3rd, reveals the mysterious section of the caverns that has not been open to the public in over 100 years.

We’re thrilled to finally be able to introduce our guests to the full story of Lester Howe’s discovery and provide them with additional history of the caverns. We’ve been developing this project to further commemorate Lester’s remarkable story for many years. We are pleased to finally be able to answer the public’s number one burning question on our traditional tour, ‘What’s behind the dam doors?’ and truly excited to be able to open this portion of the caverns to the public. Anne-Marie Galasso, COO of Howe Caverns

The Signature Rock Discovery Tour will take the more adventurous visitors beyond the mysterious doors and waterfall, which mark the furthest point of the Traditional Tour of the caverns, to explore formations, walkways, tunnels and rooms, as well as see relics from the cavern’s historic past.

Visitors will be equipped with helmets with headlamps, boots and other necessary gear as the new tour does not contain any modern conveniences such as lights or walkways. Traveling by boat, on foot and on hands and knees, visitors will have the opportunity to view the cave exactly as it would have been when it was last visited by the public in 1900.

A major highlight of the tour is Signature Rock itself, after which the tour is named, which contains hundreds of initials and signatures dating back to 1843, including the notable signatures of Howe and Phi Delta Theta ΦΔΘ.

The Signature Rock Discovery Tour takes our cavern tours to the next level, offering unique experiences and greater exploration. We are hoping that those who have already experienced our Traditional Tour or Adventure Tour will want to come back to discover the mysteries beyond the point they’ve been able to travel previously. Holly Hauser, of Howe Caverns Management Team

Reservations are required. Guests must be 14 years of age or older.

For more information about Howe Caverns and the new Signature Rock Discovery Tour, visit the Howe Caverns website or call 518-296-8900.