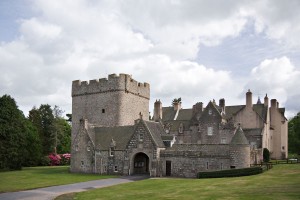 A study on bats hibernating in a 700-year-old Scottish Castle has found they don’t disturb easily.

A large number pipistrelle bats hibernating in the cellar beneath the tower of Drum Castle in Aberdeenshire were monitored throughout the winter while restoration work went on overhead tells The Press and Journal.

We wanted to see if the work disturbed the bats in any way. Very little is known about how much disturbance bats can tolerate while they are hibernating. Toni Watt, National Trust Ranger

Rangers from National Trust for Scotland and Scottish Natural Heritage used chalk to mark the locations of the bats, which hibernate in the cracks, beginning the fall of 2014. The continued to record their movements to determine how much impact the noise and vibrations have.

They concluded that the bats were undisturbed by the by the heavy machinery resurfacing the courtyard.

Amazingly, considering the noise and vibrations produced by the heavy machinery, the bats were not disturbed and numbers of bats in the hibernaculum slowly grew into winter and have only now started to dwindle as we move into spring.Toni Watt, National Trust Ranger

The castle, including the cellar, will open to the public for the summer months.

[via The Press and Journal]