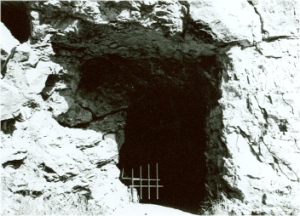 Through their efforts, 1,437 bats were surveyed hibernating just inside historic entrance of the cave, one of the highest recorded counts since 2005, which numbered 1555.

The tally included three genera of bats, with the most numerous species recorded being the Townsend’s big-eared bat (Corynorhinus townsendii) numbering 904. Next up were various Myotis species totaling 531, and finally 2 big brown bats (Eptesicus fuscus).

Jewel Cave supports one of the largest known hibernating colonies of Townsend’s big-eared bats in the world. With the historic entrance closed to the public in the winter months, Jewel Cave provides a safe haven during the winter months, allowing uninterrupted hibernation from predators and human disturbance.

Disturbances, such as the ever-popular lantern tours which use the historic entrance in the summer, would exhaust bats’ energy reserves and may have damaging effects on their hibernating populations.

Many visitors are well aware of the underground resources associated with Jewel Cave;however, the monument also provides vital surface habitat for numerous plants and animals.Serving as a hibernation site for a variety of bat species, Jewel Cave is protecting and preserving a part of the region’s unique natural history. Mike Wiles, Jewel Cave National Monument Chief of Resource Management

Vacationers and locals benefit from insect control provided by bats. As an example, many Black Hills bat species feed on beetles, moths, flies, and mosquitoes. Cucumber and June beetles, stink bugs, and leafhoppers, all well-known garden pests, are just a few of the many insects known to be consumed by bats during the summer season.