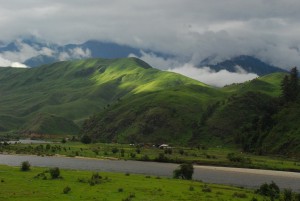 The beautiful Jaintia hills of Meghalaya, India. Photo by rajkumar1220/flickr

Cavers on the February’s 2015 Caving in the Abode of the Clouds Expedition have returned triumphant, discovering 43 new caves and mapping more than 15 kilometers (9 miles) of underground passage.

The expedition, held February 2nd to 26th was split into two parts tells The Telegraph. The first week, February 2nd to 8th, was spent in the in the Umkrypong area of Meghalaya’s Jaintia hills where two known caves were extended and eight new ones located, six of which were fully explored and mapped.

The remainder of the expedition, February 9th to 26th, focused on the Lakadong area of the East Jaintia Hills to expand on the initial reconnaissance and exploration that had been undertaken during the 2014 expedition. It was here that 35 new caves were found and explored, in addition to the four existing and partially explored caves.

The team of 37 was made up of 32 cavers, which hailed from Austria, the Netherlands, Poland, Romania, Switzerland, the US, the UK and India’s own Meghalaya Adventurers’ Association, as well as five scientists from India, Switzerland and the UK, who conducted ongoing biospeleological studies.

Till date (March 2015), the whereabouts of over 1,580 caves and cave locations are known in Meghalaya. Of these, 970 have been explored or partially explored to yield in excess of 427 kilometres of surveyed cave passage, with much more still waiting to be discovered. Brian D. Kharpran Daly, Meghalaya Adventurers’ Association General Secretary

If they weren’t busy enough, prior to the expedition, the team paid a visit to Mawlangbna near Mawsynram in East Khasi Hills, where the resurgence cave of Krem Pamskei was explored for 450 metres (1476 feet).