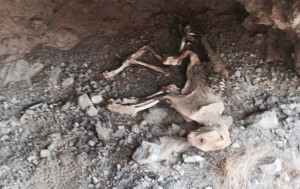 The mummified Mountain Lion found in the Nevada cave. Photo by Donald Moore via KVVU-TV

A hiker came upon an unexpected discovery while exploring the Sheep Mountain Range, north of Las Vegas, over the weekend.

Las Vegas’s Fox 5 reports that the remains of a mummified mountain lion were found, completely intact, lying in a small cave.

To retrieve the rare find so that in can be studied, members of Red Rock Search and Rescue, who happened to be training nearby, used their recovery skills.

Fifteen members, along with a biologist, participated in the extraction, which saw the remains carefully loaded into a cardboard box and placed on a rescue litter.

Although there is no indication how old the remains are, Nevada is home to a healthy population of Mountain Lions.

They specimen will be handed off to a research team in May.