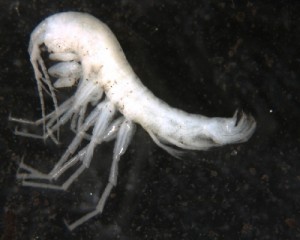 A tiny, colorless crustacean, first discovered in November 2008, officially became a new species earlier this year when a pair of researchers named the creature and described it in the scientific journal Subterranean Biology.

The new species of freshwater shrimp, only a quarter of an inch long from antenna to tail, has been dubbed Stygobromus albapinus (White Pine) after the Nevada county it was found in.

While crawling through a narrow limestone passage in Nevada’s Model Cave about a half mile from the entrance two staff members at Great Basin National Park spotted the tiny shrimp in a puddle of seeping groundwater.

“It takes about an hour of crawling and belly crawling through mud to get to it,” – Gretchen Baker, Great Basin National Park Ecologist to the Las Vegas Review-Journal

Only found in that 182 meter (200-yard) stretch of cave passage at the eastern edge of White Pine County, it is the eighth new species discovered at Great Basin National Park since 1999 and the sixth thought to exist nowhere else in the world.

In order to obtain enough specimens to describe them accurately, researchers had to return to the cave a dozen times. During those trips only twice were any shrimp actually found, with only 30 total specimens located.

The lack of eyes and pigment on the shrimp suggest it has lived underground in complete darkness for a long time.