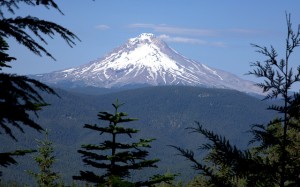 A view of the glaciers on Oregon’s Mount Hood.Photo by Smithfl/Wikimedia

A couple hundred feet of Snow Dragon, one of Oregon’s best known glacier caves, partially collapsed recently only a short while after two skylights opened in the ceiling.

In an interview on Oregon Public Broadcasting’s Think Out Loud, Brent McGregor, one of the coordinators of the Sandy Glacier Cave Project, eluded that the destruction, although not unexpected, is happening much faster than anyone anticipated.

In 2014 in Snow Dragon we experienced this giant skylight that went from wall to wall, bear in mind this cave is 80 to 90 feet across in the borehole passage, and a month after the first skylight opened up there was a second one closer to the entrance that appeared and within a month or two after these two skylights appeared there was a total collapse between the two of them. The entire roof of the cave, the ceiling roof of the cave entirely just broke loose. Brent McGregor, Sandy Glacier Cave Project Coordinator

Whats also strange is the timing of the collapse. Instead of occurring during summer when the temperatures are warmer and the glacier more mobile, the collapse happened during the coldest months of the year.

It was December or January this happened, which we’d usually think that happen in the summer in the warmer time, but with our lean winter possibly spurred that on but there it is. We’ve lost a couple hundred feet of the cave. Brent McGregor, Sandy Glacier Cave Project Coordinator

More collapses are expected in the future, with the other caves on the glacier also beginning to display skylights, further accelerating airflow and melting.

In an effort to capture the caves before they’re gone forever, a pair of videographers recently made five trips to the caves to take some incredible time-lapse videos.

The Sandy Glacier Caves, including Snow Dragon, were also the subject of an NSS CaveNet webinar held back in February, in which Brent McGregor was one of the presenters. The webinar is available online on the NSS Webinar website.