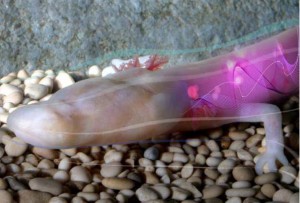 The olm, an entirely-aquatic salamander endemic to the Dinaric Alps. Photo via the Society for Cave Biology

Using a new technique a team of researchers has found the first physical evidence of olms (Proteus anguinus), a rare species of aquatic cave-dwelling salamanders, in Montenegro.

Traditionally found in caves of the Dinaric Alps, the blind pigmentless olms live in the underground water that flows through the extensive karst of southern Slovenia, near Trieste, Italy, and southwestern Croatia, and Herzegovina.

Although not endangered, the olm’s conservation status is listed as Vulnerable on the IUCN Red List of Threatened Species due to their extreme susceptibility to changes in their environment.

Unfortunately being a completely aquatic cave species has made it difficult for researchers and conservationists to understand their distribution. That is, until now.

BirdLife International reports that a team with the Society for Cave Biology, funded by the Critical Ecosystem Partnership Fund, developed a sensitive and inexpensive technique to detect tiny fragments of DNA in samples of water.

The so-called environmental DNA (eDNA) comes from skin cells, shed from olms during their natural process of skin regeneration.

Following many hours in the field and thousands of water samples, the researchers were then able to detect the tell-tale eDNA in new locations in both Montenegro and in Bosnia and Hercegovina, thus conclusively proving the existence of olms in those regions.

This research should help guide conservation authorities in both Bosnia and Herzegovina, and Montenegro where no protections for these creatures have yet been defined.