For the past few years a team of students and graduates from York University Cave and Pothole Club have been running an expedition to the the mountains of Durmitor, Montenegro. This limestone massif is located in the North of the country near the Bosnian border, and boasts around 1,500 meters (4,900 feet) of depth potential. 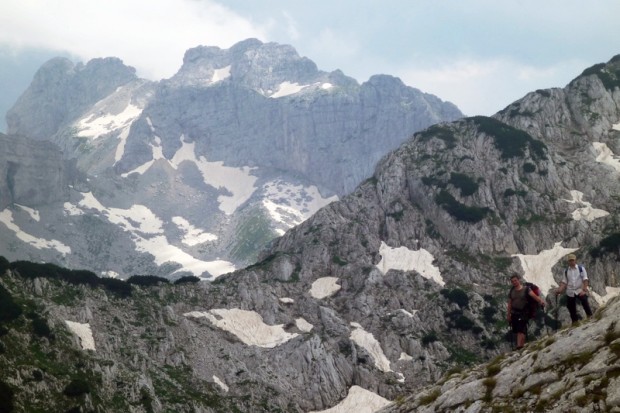 The Karst landscape of Durmitor, where York University Cave and Pothole Club have been exploring since 2004. Photo by Mike Rippon

YUCPC first visited Montenegro in 2004 as part of a large international expedition run by ASAK (Belgrade University Caving Club), but it wasn’t until 2011 when things really got going. Fed up with the largely covered Southern area where the international expedition had been for over 2 decades, three YUCPC cavers organised a reconnaissance trip to the remote, untouched Northern region. 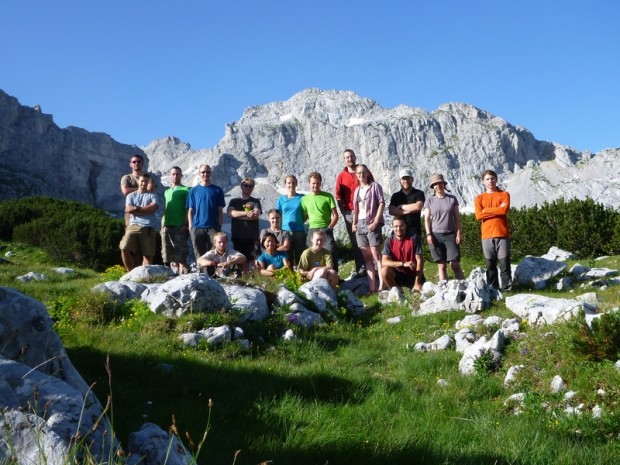 The full team, made up of almost entirely York University students and graduates. Photo by Cat Moody

As we were used to in England, it turned out to be grim up North. Our walk from civilisation took over 5 hours, and was something of an effort with 40 kilogram (88 pound) bags and 600 meters (2,000 feet) of altitude to gain. On arriving at the top of the plateau, we could find no source of running water and had to use a brackish, carcass-filled pool to cook our supper. Fortunately, numerous semi-permanent snow plugs provided a cleaner, though more complicated water source for the rest of the expo.

Having just about managed to survive for our first night on the mountain our hopes for caving were a little low. However, they soon picked up when we discovered our first promising entrance – Yf1, now also known as JVC. An enormous snow filled hole, with a large, draft-bored tunnel heading down into the snow plug, began to rekindle our confidence in Durmitor. 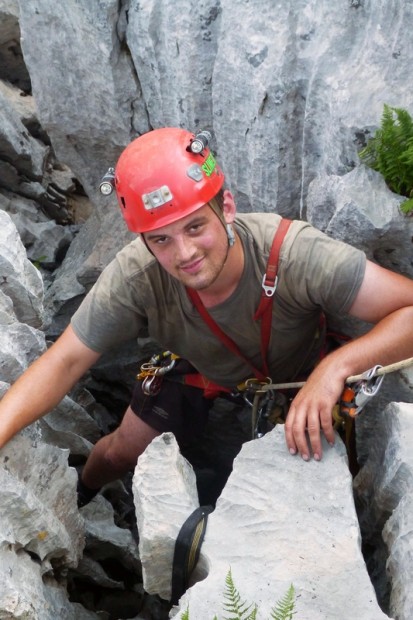 Also in 2011 we found several promising leads, areas for further prospecting and shaft bashing, including an area of exposed karst over the ridge from camp named Kobilji Do. When we left our new area after 2 weeks we were full of excitement for 2012, only slightly reduced by leaving all of our prospecting data and maps behind and having to go back up for them.

Our good news from Durmitor convinced a ten-strong team to return in 2012. Our bags were a few kilos lighter, while snow collection, cooking and water filtration were more systematic, making for a rather less desperate fortnight. With far more rope and manpower, we pushed to -133 meters (436 feet) in JVC, via impressive passages between ancient snow and ice. Two more leads from 2011, Yf10 and Yf11, were both pushed to conclusions at several hundred metres long. Several promising new leads were also found in Kobilji Do, not the least of which was Bunda Jama, an interesting shake hole with a rift leading away from Durmitor’s all-pervasive snow and into solid (for once) rock. 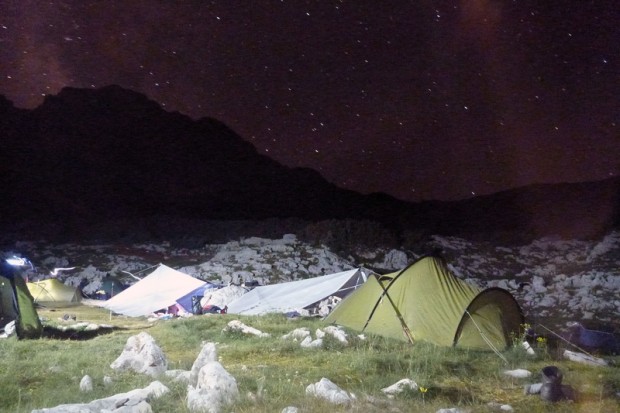 The camp in the Durmitor Mountains – five hours from the nearest road, and home for a fortnight. Photo by Mike Rippon

With our leads getting ever larger, and Yf1 still on the go, 17 people were tempted in 2013. However, news at first was bad. With a record-breaking amount of snow in Europe, Yf1 was entirely sealed at the entrance, and several attempts over the fortnight could find no way to our bolts or pitches. 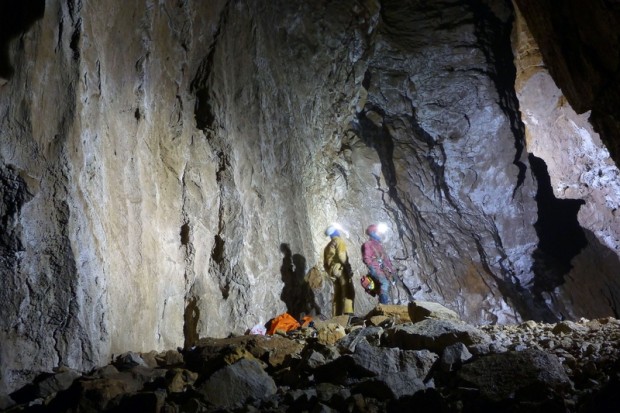 Despite this initial disappointment, things started getting interesting in Kobilji Do. We were glad of Bunda Jama’s snow-evading rift, and before long it became our biggest lead. A series of impressive shafts descended from the entrance to a large chamber just above 100 meters (328 feet) down, named Arbitrary Meet. Below this, a pitch led to a significant dig, named Half-Hour-With-A-Crowbar for its optimistic early time estimate. Once this had been cleared, yet another pitch down yet another aven led to a second dig requiring enlargement. At this point the cave really got going: a large rift led forward and up, over a space below which we soon began to realise was rather big. Once the traverse had been bolted, a tri-hang at an appropriate place created a spectacular, free hanging, 68 meter (223 foot) pitch down the enormous Jungle Is Massive shaft. 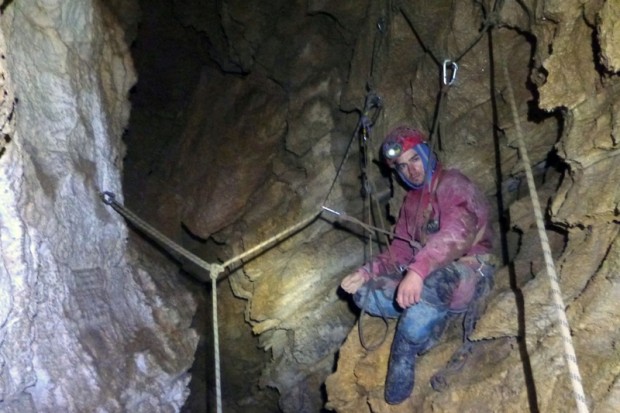 Andrew Gilmartin at the head of JIM shaft, a 68m free hanging pitch in Bunda Jama. Photo by Mike Rippon

The lower sections of Bunda Jama involve a lengthy series of dry, high level passageway before a significant stream (rare in Durmitor) joins the passageway. Here a complicated section of rift was explored to our limit of time and gear at another pitch, estimated to be around 30 meters (98 feet) deep. This pushes Bunda Jama to over 300 meters (984 feet) deep. 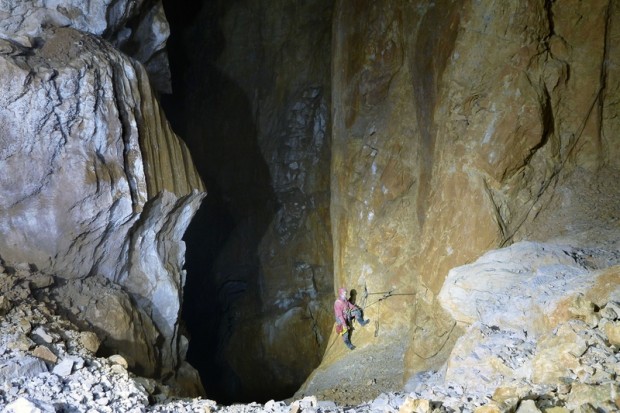 Along with other significant leads, 2013 was no break from the past two years, and spirits are already running high for a return in 2014.

About Toby Buxton
Toby Buxton is a graduate of York University and has been caving since 2008 across England, France, Slovenia and Montenegro. For the past 4 years he has played a large part in York University’s exploration of the Durmitor Massif in Northern Montenegro.
Sorry, comments have been closed.